Some of Kaylin Wesley’s earliest memories are of Saturdays spent at her grandmother’s house. Even on weekends, the young girl had to remain in student mode, with a pen and paper in hand, ready to learn.

Her maternal grandmother, who taught primary grades in Anaheim and Los Angeles for 30 years, and grandfather, a former deputy superintendent of the Los Angeles Unified School District, instilled in their children and grandchildren a respect for learning and an understanding that education would be critical to their success, no matter what their goals in life.

These early experiences fueled Wesley’s desire to excel academically and encourage other students, especially those from her neighborhood in South Los Angeles, to do the same.

As an undergraduate, she accomplished this through research and mentoring, all while becoming the primary caregiver for the grandmother who helped chart her educational path. 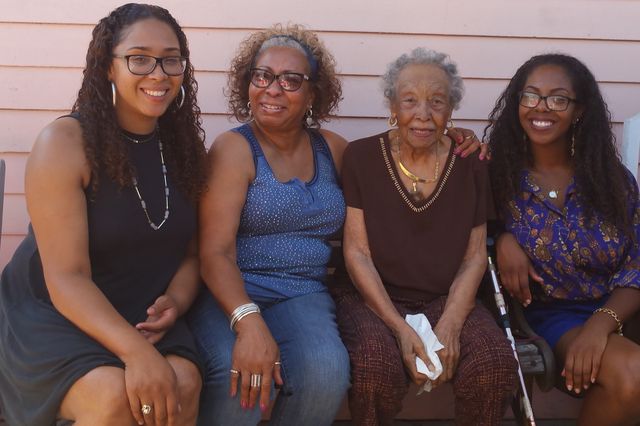 Kaylin Wesley, on right, is part of three generations of women who graduated from college. When she graduates this week, they will collectively hold six degrees among them. From left: Wesley’s sister, Nicole; her mother, Karen; and her grandmother, Ernestine.

Wesley designed a study based on a survey of 244 LAUSD mental health providers about the barriers keeping students from seeking their help. The research, which she conducted with guidance from UCLA psychology professor Bruce Chorpita, aims to understand these barriers and to identify ways to help bridge families, schools and mental health institutions.

“I realized early on that a lot of our traumatic experiences and behaviors are shaped by the environment we grew up in,” said Wesley, who is looking ahead to graduate school and hopes to one day found a think tank that focuses on some of the most pervasive challenges that black youth face when navigating systems like education, health care, criminal justice and child welfare.

“What happens when you don’t have steady meals, if you have to study on the floor or sleep in the bathtub because people are shooting outside the house? I’m aware — because I lived near it — that it happens. A lot of people are affected by this, and they’re systematically black and brown children. There’s a cycle to be disrupted.

“Kids are suffering, and they’re overwhelmingly kids from marginalized communities; whether it involves race and ethnicity or socioeconomic status, it doesn’t matter,” Wesley said. “As cliché as it sounds, they’re the future. Frederick Douglass said, ‘It is easier to build strong children than to repair broken men.’” Building resilient children “is what I’m trying to do.”

UCLA education professor Tyrone Howard, associate dean for equity, diversity and inclusion in UCLA’s Graduate School of Education and Information Studies, and who has advised Wesley on some of her research projects, believes her work has immense potential for positive impact.

“Rarely do we see subject areas converging in ways that define a research agenda, where you see someone who is looking at racial identity and issues of mental health for underrepresented students, and asking to what degree these issues might affect their college-going processes. This is important work, and Kaylin has a lot of momentum behind her.”

Howard first met Wesley when she was a high school junior at the Los Angeles School for Enriched Studies (LACES) participating in UCLA’s Vice Provost Initiative for Pre-College Scholars (VIPS) program, one of many campus programs that prepare students from underserved communities to compete for a place at four-year universities.

“She was the kind of student who was grounded and possessed remarkable academic skills,” said Howard. He said he knew Wesley would have lots of options when it came to college, and was pleased to learn that she had decided to enroll at UCLA.

She thrived at UCLA, where she became a research apprentice at the BRITE Center for Science, Research and Policy at UCLA; a lab manager for UCLA’s Child FIRST Lab; and a research assistant at the Anxiety and Depression Research Center on campus.

She studied abroad in Peru; served as a marketing ambassador for new programs and clerical administrator for UCLA’s Social Science Interdepartmental Programs; and led a series of workshops to inform students about scholarship opportunities. Wesley was also active with organizations that included the Afrikan Student Union, the National Alliance for Mental Health, the Mar Vista Gardens Housing Project Smoking Cessation Program and the VIPS program.

Charles Alexander, associate vice provost for student diversity in the UCLA College and director of the Academic Advancement Program which administers VIPS, said her choice to continue mentoring at her former high school has helped UCLA build a strong pipeline between the campus and LACES.

“Kaylin grounds her mentoring techniques in her own personal research to create equitable educational experiences at LACES for all students,” said Alexander. “Further, she has worked closely with school administration to implement change in pedagogical and cultural approaches for black students. … She is a strong voice amongst her peers who often look to her for creative ways to empower and advocate for students. She embodies what it means to be a Bruin who achieves academically, engages in research, studies abroad, cares for her family and engages in her community.”

Several of the students she has mentored have gone on to become UCLA students themselves.

Among them is Ariel Mengistu, now a UCLA freshman who met Wesley when Mengistu was invited to join the VIPS program as a high school junior.

“Kaylin has always encouraged me to be true to myself and to listen to myself in terms of what I really want to do, what will genuinely make me happy and what interests me,” said Mengistu, who will be taking over Wesley’s VIPS lead mentor role at LACES in the fall. “That’s how much she’s influenced me because she did such a good job. I just want to do the same and … do what I can for everyone else.”

At the same time that Wesley was juggling the rigorous demands of studying at UCLA, work, volunteering, research and mentoring, she became the primary caregiver for her grandmother in 2015, unknown by many around her.

Wesley and her grandmother, in her late 80s and recovering from a hip replacement, lived together in South L.A., a 90-minute, one-way trip to and from campus. Wesley spent her evenings and weekends taking care of the house, paying bills, cooking, administering medication and ensuring that her grandmother’s medical appointments were scheduled and kept.

Wesley said her grandmother, who once took child education classes at UCLA, loved hearing about her studies and activities at UCLA.

“She would ask critical questions,” Wesley said, “and make me think a little bit more about my research. I would pitch my research to her and practice my presentations in front of her. She even helped me make my research poster. We would lie in bed, and I would ask her what colors she thought went together best.”

Sadly, her grandmother died of cancer four months ago. Wesley said that the time she spent with her was invaluable and that if she had the choice, she would do it all over again.

“It’s sad that she is gone — she would have loved to see me graduate — but I know she’s going to have the best seat in the house.”